310.456.9930
Our Founders
Leading the way to your higher self...
Our mission - to heal and enlighten the world through cannabis, plant medicine and higher consciousness practices, with a focus on women, community, environmentalism and compassion.
Look What the Tide Dragged In

Named High Time’s “100 Most Influential People” (High Times Magazine March 2018), “Business Woman of The Year” by Industry Power Women and LA County’s first and only recipient of a Cannabis Business License, Yvonne DeLaRosa Green is considered to be not only a cannabis pioneer but she is also the face and voice for women and diversity in the industry.

Yvonne DeLaRosa Green is an award winning actress, trailblazing advocate, visionary entrepreneur, and philanthropist in the world of cannabis. Yvonne’s history of activism began from a young age when she met and was mentored by the late cannabis activist Jack Herer.

Later in life, Yvonne would use her knowledge of the healing power of cannabis to help her mother, who had been diagnosed with cancer. After taking her mother to multiple medical cannabis dispensaries, Yvonne was shocked and disappointed to find that too few dispensaries proffered a welcoming, knowledgeable and relaxing environment; it was then that she realized that it would be up to her to create such a space.

In 2008 Yvonne created the worlds first upscale dispensary and simultaneously the worlds first hybrid dispensary when she opened the now legendary 99 High Art Collective which served not only as a dispensary but also as a visionary art gallery. Rolling Stone Magazine amongst many others took notice and heralded 99 High Art as one of the best dispensaries in California in their front page story “MarijuanAmerica”. 99 High Art was located on world famous Abbot Kinney Blvd in Venice beach and quickly became home to the celebrities, musicians, artists, the burning man community, and the psychedelic glitterati, literati and cannabis elite.

Referred to as a modern day Be-in, 99 High Art was the first to host such events as “High Hatha Yoga” classes and way ahead of their time Art exhibits such as “Ayahuasca Visions” by the now late Pablo Amaringo known as the father of Neo Amazonica Art.

As one of the only women in cannabis at the time, Yvonne cemented her legacy in cannabis as a true pioneer and visionary for innovating and elevating the cannabis industries image.

In 2015 Yvonne and her partner Sam expanded their vision to their hometown of Malibu, California – creating the beloved 99 High Tide- Malibu. In true cannabis pioneer form they opened on 4/20 at 4:20pm with legendary comedian and activist Tommy Chong as their first patient! 99 High Tide has quickly become one of the most honored and revered dispensaries in the world.

In 2017, Yvonne continued to blaze trails by becoming the very first person to a receive a cannabis business license in Los Angeles County and was honored for her achievements in cannabis by Industry Power Women, who named her “Business Woman of the Year”.

Our last elections on November 6, 2018 saw Yvonne and her partner/husband Sam Boyer make history once again by helping their city’s most vulnerable access Adult Use Cannabis and Delivery. Together they co- wrote Malibu’s Measure G, which won by a landslide- making Malibu the first city to have its residents overthrow a ban on Adult Use and Delivery since Prop. 64 took effect.

The 99 High Tide brand is acknowledged as the best of the best in the cannabis industry and has made its name synonymous with luxury from their cannabis products, high end style and upscale customer service.

Outside of the cannabis industry, Yvonne has also found success in the world of television and film. Yvonne has appeared in various television shows such as NCIS, CSI: Miami, How I Met Your Mother, King of Queens, The Closer, Law & Order, Longmire, NYPD Blue, Weeds, and played the lead in her very own FOX series entitled Senor White, opposite comedian Ron White.

Armed with a masters degree in film and television from UCLA, Yvonne has helped create award-winning projects and documentaries, as well as garnering awards as an actress for various films and television.

She continues to use her knowledge of the film industry and her celebrity in the entertainment and cannabis industries to assist in spreading the word for cannabis and all of its benefits. 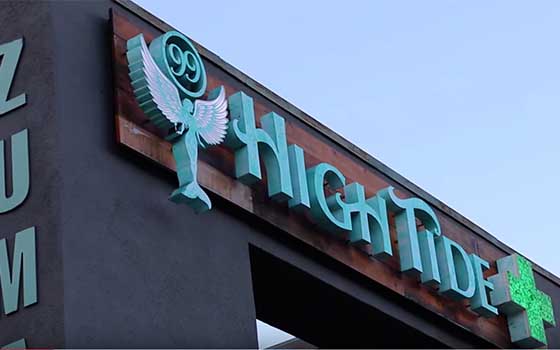